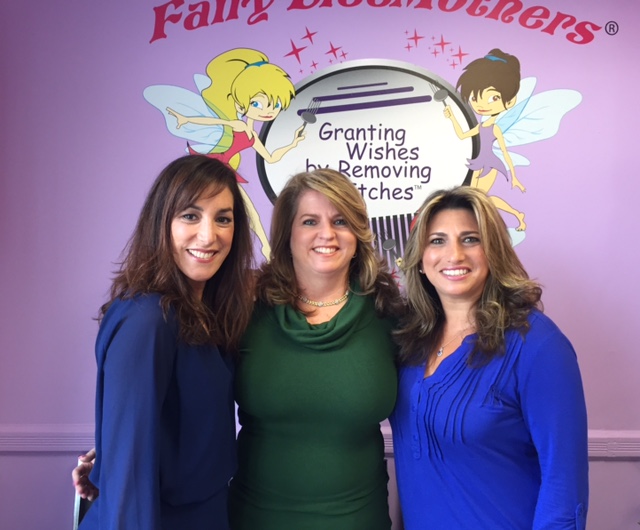 Fairy LiceMothers, an established business formed in 2008, is continuing to grow with the addition of their fourth storefront location in Glen Head, NY. With current locations in Oceanside, NY, Deer Park, NY, and Austin, TX, the three co-owners, Michelle Villella, Christine Bonanno, and Carol Gilbert are dedicated to eliminating the persistent lice problem and educating the community on lice. While providing safe and effective products and treatments to rid lice, the Fairy LiceMothers are determined to help parents, children, and families free themselves of this nuisance.

Since there is such a stigma surrounding lice, no parent wants to share their irking story. However, Michelle Villella did the complete opposite, which later brought Fairy LiceMothers to life.

After noticing that her daughter’s scalp was very itchy, Michelle washed her hair every day with dandruff shampoo, assuming it was just dry. However the itching didn’t stop. When the school nurse was doing lice checks and finding lice on many children but not on her daughter, Michelle still didn’t understand the problem. That’s when she decided to bring her little girl to the pediatrician where he confirmed that she just had a dry scalp. Months passed and later Michelle soon found out the real issue of her child’s itchy head.

When Michelle received a phone call from her daughter’s camp, she was disturbed to find out the nurse had found tons of nits on the little girl’s hair and lice crawling on her scalp. It was a severe infestation, and Michelle retrieved her daughter from camp and went straight to the drug store. After picking up a product from a brand she trusted, which she later found out was highly toxic, Michelle was stunned to find her tub filled of lice as she used the product on her daughter’s head. Panicking and overwhelmed, Michelle didn’t know what to do, that’s when she and her husband decided to go to a lice removal treatment center an hour away just to rid her daughter’s lice.

When arriving, Michelle’s worst nightmare had come true. She was told that the entire family must also have lice because there was such a severe infestation in her daughter’s hair. Bringing the whole family back, lice had indeed spread to each of them, even the 5 month old, the grandparents and the extended family, aunts, uncles and cousins. It was a complete mess.

From genuine necessity came opportunity, thus Fairy LiceMothers was created in 2008. With a passion for helping others, Michelle Villella and her two friends, Christine Bonanno, and Carol Gilbert, realized there was so much incorrect information about head lice and nowhere to turn for help.

Taking matters into their own hands, Michelle, Christine, and Carol sought education on the real facts about lice and Carol became certified on the most efficient and entirely safe way to remove lice using the Shepherd Method (a strand by strand approach) and non-toxic, harmless products. Fairy LiceMothers then started as an in-home service, driving all over Long Island, Manhattan, Brooklyn, Queens, Bronx, and Staten Island to people’s homes.  But because of an overwhelming demand, it became too busy to handle the business this way and that’s when they opened their operation in a basement of a house in Oceanside, NY. This worked perfectly for about 3 years but soon Fairy LiceMothers outgrew that location because the amount of people coming for treatments became overwhelming and there was limited parking. After this Fairy LiceMothers opened their first storefront location on Long Island in Oceanside, NY, and ever since the business has continued to grow.

In the past 8 years the Fairy LiceMothers have opened a total of 4 lice treatment centers, put their product on the shelves of mom and pop drug stores across the country, and hosted free educational seminars to schools across Long Island, Brooklyn and Queens. The business also sponsors local soccer and baseball teams, donates products to school charity events and donates services to families who are truly in need.

With their growing business, the Fairy LiceMothers’ goal is to assist every person who has lice, either in their treatment centers or through their DIY treatment kits. Available to educate on how to successfully remove an infestation and dispel all the myths about lice, the Fairy LiceMothers are the ones to turn to for anyone having a lice problem. By assisting parents and other individuals coming to them in various emotional states from frantic and angry to confused and scared, the co-owners know how to soothe these feelings in no time. They strive to emphasize that lice is not the end of the world, eliminating the negative stigma associated with the critters.